An OCR Engine is the part of OCR software that does the actual character recognition, analyzing the pixels on an image and figuring out what characters they represent. This raw result can be further processed using Grooper's OCR Synthesis capabilities, producing the final OCR result used by Data Extractors to match text in a document and return the result.

OCR Engines perform the "heavy lift" of the OCR operation by getting the raw character data off document images. They analyze the pixels on the image and figure out what text characters they match.

OCR Engines themselves have four phases:

First and foremost, OCR applications require a black and white image in order to determine what pixels on a page are text. So, color and grayscale images must be converted to black and white. This is done by a process called "thresholding" which determines a middle point between light pixels and dark pixels on the page. Lighter pixels are then turned into white and darker ones are turned into black pixels. You are left with only black and white pixels, with (ideally) all text in black and everything else faded into a white background.

One of the most important aspects of pre-processing is "segmentation". This is the process of breaking up a page into first lines, then words, and, finally, individual characters.

In a perfect world, characters would be segmented out at this point as well. After all, there is still some space between each character, just a little smaller than between each word. You can easily see this with fixed-pitched fonts. However, the world of printed text is rarely that perfect.

Looking at the image below, there is no white space between the "a" and "z" or "z" and "e" in "Hazel". Just looking at the histogram projection, there's no break in the pixels to define where one character stops and another begins. There's a slight break in the "n" in "Daniels". So, there is some white space in the middle of the character where there shouldn't be. But, that shouldn't mean those are two separate characters. 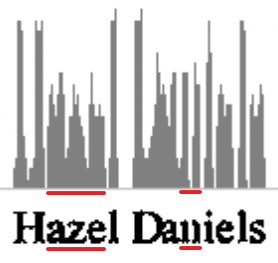 If the characters were separated out using the normal segmenting we've seen previously, we might expect a very poor result. However, ultimately, we get the result we expect, "Hazel Daniels".

Modern OCR Engines perform more sophisticated character level segmenting than just looking for small gaps between characters. Characters connected by small artifacts can be isolated from each other and characters that are broken apart can be linked together. This is done both by analyzing the peaks and valleys of pixel densities to determine where a gap "should" be as well as further segmenting the word to look at the context of portions of a character before and after to make a decision as to where one character starts and stops.

Once the OCR Engine has segmented the entire image into individual character segments, it can use character recognition to determine what character corresponds to that segment. However, this is where a lot of OCR errors can crop up. Depending on the quality of the image or the original document, characters can be joined and disconnected in many different ways. The OCR Engine may not perfectly separate out one segment of a word as the "right" character.

There are two basic types of recognition algorithms: matrix matching and feature extraction.

Matrix matching compares a NxN matrix of pixels on a page to a library of stored character glyph examples. This is also known as "pattern recognition" or "image correlation".

The OCR Engine then makes a decision about what character that matrix of pixels is. In this case, a "G". Matrix matching does have some pitfalls, however. Because it is comparing text to the stored glyph pixel by pixel, the text needs to be similar to the stored glyph's font and scale in order to match. While there may be hundreds of example gylphs of various fonts and scales for a single character, this can cause problems when matching text on poor quality images or using uncommon fonts.

The second type of recognition algorithm, feature extraction, decomposes characters into their component "features" like lines, line direction, line intersections or closed loops. For example, an "O" is a closed loop, but a "C" is an open loop. These features are compared to vector-like representations of a character, rather than pixel representations of the character. This is a newer recognition technology. Because it looks at features that make up a character, rather than a pixel by pixel comparison to a glyph of a certain font, this method is not as reliant on the font used on the page matching a particular stored example.

Just like with matrix matching, the OCR engine makes a decision about what character matches the extracted features. In this case, again, a "G". In engines using a combination of matrix matching and feature extraction, the results of both algoritms are combined to produce the best matching result. Each character is given a "confidence score", which corresponds to how closely the character segment's pixels matched either the stored glyph's matrix or features or combination of the two.

This presents another layer of potential errors. Given a document's quality, fonts used, and even the variable size of fonts on a page, the OCR Engine may recognize a character as the wrong glyph.

The OCR Engine has to make a decision, which ultimately may not line up with what it is on the page. Especially in situations like this, where it may be difficult for even a human being to read the character, the OCR Engine will have a hard time recognizing the character.

Without any context around a character, these OCR errors can make sense. The letter "a" and "o" can look fairly similar, especially using certain fonts. However, the word "ballboy" is a real word, and "bollboy" is utter nonsense.

The most common post-processing done by OCR Engines is basic spell correction. Often errors resulting from poor character recognition result in small spelling mistakes. For many OCR Engines (all commercial OCR Engines), results are compared to a lexicon of common English words, and replacements are made if possible.

Note, this correction is only going to apply to words in the OCR Engine's lexicon. Proper nouns (unless in the lexicon) will not be corrected.

OCR Engines: What is the best OCR engine?

The short answer is the best OCR engine is the best one for your needs. Grooper offers a variety of OCR engine integrations. There are many considerations you'll want to evaluate. Of course, you want your OCR engine to be accurate. However, the more accurate an OCR process is the more computationally expensive it tends to be. It takes more computing power (and hence processing time) to get more accurate results. Highly accurate OCR results tend to cost more too. For example, Google's Tesseract is an open-source OCR engine, which is great in terms of it being free. However, its results simply are not as accurate as ABBY FineReader which is a "premium" OCR engine option available to Grooper.

All Grooper installations ship with Transym's OCR engine. We favor Transym because it provides accurate OCR results, with efficient use of computational resources. It is also very reasonably priced for its accuracy and performance.

See below for more details on all the OCR engine's available in Grooper.

All Grooper installations come standard with Transym 4.0. This engine provides highly accurate English language OCR results of printed text at no additional cost to the user. It is the standard by which we judge other engines. It does particularly well with high density images, containing a great deal of text and characters to parse through (Including large amounts of numerical and non-semantic strings). Transym also has the benefit of being computationally efficient. For the accuracy of its results, its speed is unparalleled.

Transym 5.0 is also included in every Grooper installation. This engine expands Transym 4.0 to support multiple languages, including additional characters for Greek, Cyrillic, and Eastern European alphabets.

Tesseract is Google's open source OCR engine for printed text. Tesseract (version 3.04) is included in all Grooper installations starting in version 2.72. Tesseract is generally not as accurate as Transym, but can perform better in certain situations. Tesseract is unique in that you can train the engine to recognize fonts, providing better accuracy for non-standard fonts not handled well by other OCR engines. Out of the box, Tesseract in Grooper can be configured to read MICR, OCR-A, and OCR-B fonts. Tesseract is also much slower than Transym. It's not uncommon for Tesseract to OCR a page ten times slower than Transym.

Starting in version 2.72, the Microsoft Azure OCR engine is available in Grooper. Azure uses Microsoft's Computer Vision API to perform printed text or handwritten character recognition. From our testing of this OCR engine, it does particularly well at recognizing handwritten text. It does, however, require a subscription key at an additional cost to the user.

To learn how to layer OCR results and the configuration requirements for Layered OCR, please visit the Layered OCR article.