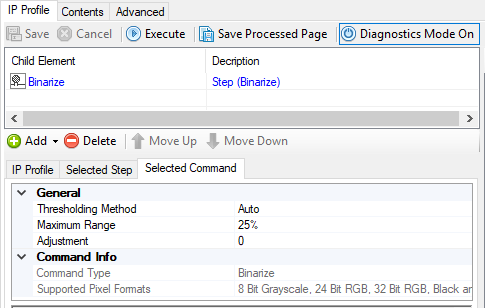 Binzarize in an IP Profile and its property panel.

Binarize converts a color or grayscale image to black and white for further processing.

Binarize is an IP Command that converts a color or grayscale document image into black and white. This can be used as a basic method of cleaning up a document, rendering it black and white to produce better OCR results. This is accomplished by "thresholding" the image, setting a value that determines which pixels should be "white" and which should be "black". There are four thresholding methods available to Grooper: Simple, Auto, Adaptive, and Dynamic.

Binarization is also considered an "IP Primative" in that it is foundational to other image processing operations. Binarization is helpful (and sometimes required) to perform other IP Commands, such as Line Removal and Box Removal. These commands will have an ability to pre-process the image with its own binarization settings before final document binarization.

Many of Grooper's Image Processing capabilities work better if an image is in black and white instead of color (or simply won't work when using a color image).  Take Line Detection for example.  At its most basic level, a line on an image is a string of pixels one after the other.  Grooper would have to pick out one string of colored pixels in a row and decide if it was a line or just a string of pixels that happened to be the same color.  The result would be catastrophic. However, if you convert the color image into a black and white one, you only have two choices to make, is the pixel black or white?  Is it a string of black pixels in a row?  That's a line.  Easy.

Binarization converts color images to black and white by "thresholding" the image. Thresholding is the process of setting a threshold value on the pixel intensity of the original image.  Pixel intensity is a pixel's "lightness" or "brightness".  Essentially, once a midpoint between the most intense ("whitest") and least intense ("blackest") pixel on a page is established, lighter pixels are converted to white and darker are converted to black.  Or put another way, pixels with an intensity value above the threshold are converted to white, and those below the threshold are converted to black.  This midpoint (or "threshold") can be set manually or found automatically by a software application. The Thresholding Method can be set to one of four ways:

Each method has its own set of configurable properties.  See below for details on each method.

This is by far the simplest to configure.  All you do is manually set the pixel threshold for the documents.  However, simplest doesn't necessarily mean easiest.  This can be a value from 1 to 255.  On a thresholding scale, 0 is pure black and 256 is pure white.  If you set the threshold to 255, that would mean any pixel with an intensity value less than pure white would be converted to black.  For many documents, this ends up turning the entire page black.  Even if a page "looks" white, if it is not totally 100% pure white, those pixels are turning black.  Be careful, for many images scanned on color or grayscale (and even some digital documents as well) what you think is white may actually be just extremely close to white (same for black).

It should be noted, this is a fixed value for all pages.  Documents are uniformly transformed according to the single value. If you have a set of documents whose black/white pixel intensity changes from one to the next, this method may not prove reliable. 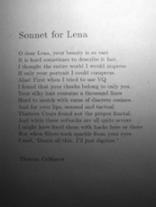 An example of an image suited for Adaptive thresholding.

Both Simple and Auto use a conventional form of thresholding by setting a global threshold for the entire image. If the threshold value is determined to be 127 for the image, a pixel with a lower intensity than 127 will be converted to white and a pixel with a higher intensity will be converted to black. Adaptive and Dynamic thresholding changes dynamically over the image. This can accommodate changing lighting conditions in the image, resulting in strong illumination or shadows on only portions of the image.

The Adaptive method examines the intensity values of an area around each individual pixels rather than the average intensity of the entire image. This area is called the "local neighborhood".

The Dynamic thresholding method uses the Adaptive method but works to preserve darker pixels on the page.