Image Processing (often abbreviated as "IP") can assist the OCR operation by providing a "cleaner" image to the OCR Engine. The general idea is to give the OCR engine just the text pixels, so that is all the engine needs to process.

In the example above, the image was altered using an IP Profile with six steps, each step containing a different IP Command.

This is the list of steps in this IP Profile, each one named for the IP Command used: Auto Border Crop, Binarize, Shape Removal, Line Removal, Speck Removal, and Blob Removal

For this IP Profile, the first step runs the Auto Border Crop command. It crops the image, removing its border.

In this case, the border was actually part of the document. Usually, borders appear around documents because of how they were scanned. However, the goal is still the same. Remove superfluous, non-text pixels interfering with the OCR operation.

OCR requires a black and white image to analyze pixels and segment them out into characters. It needs a binary representation of the image: "Is text" or "is not text" While OCR engines will binarize an image as part of their pre-processing phase, doing so in an IP Profile gives you control over how that operation is done. There is more than one way to binarize an image, and you have no control over it if you let the OCR engine do it for you.

The next step runs the Shape Removal command. Shape Removal takes trained examples of shapes, in this case the company logo, locates them on a document and removes them.

While probably not strictly necessary for this example, removing the shape does give OCR one less thing the OCR engine has to look at when segmenting out characters and figuring out what characters these pixels should be.

You are left with an image that the OCR engine can much easier break up into line, word and finally character segments, vastly improving the accuracy of character recognition.

However, for the example above, the IP Profile's result is drastically different from the original image. While it certainly helps the OCR result, it's likely, at the end of the process, you want to export a document that looks more like the "before" picture than the "after". Luckily, Image Processing can be performed in two ways:

Of the commands in those categories, there are one or two that are particularly common.

There's a great deal of image processing that is extremely helpful for OCR, but ultimately renders the document almost indistinguishable from the original. Grooper allows you to temporarily alter the image before OCR is performed during the Recognize activity. In this case, an IP Profile is applied to a temporary copy of the image and its result is given to the OCR Engine to recognize characters on the page. Once text characters are obtained from the image, the temporary copy is discarded, leaving the original image to be used during Data Review and final export. 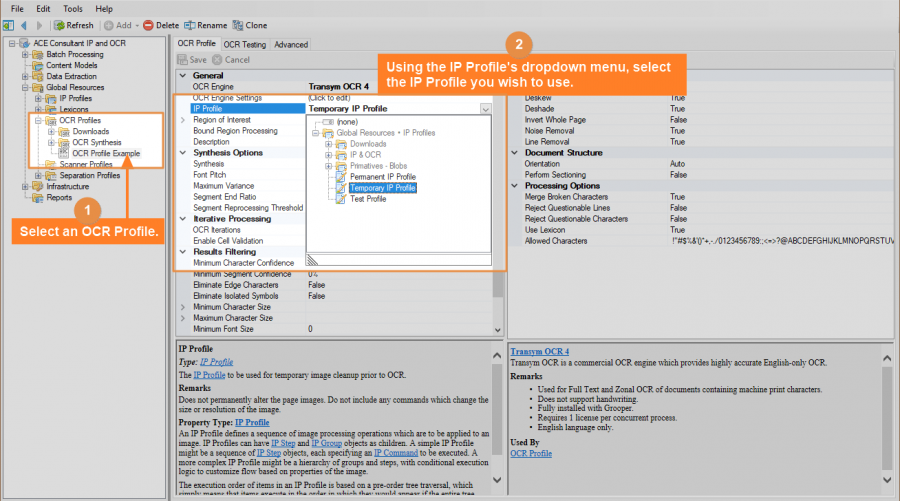 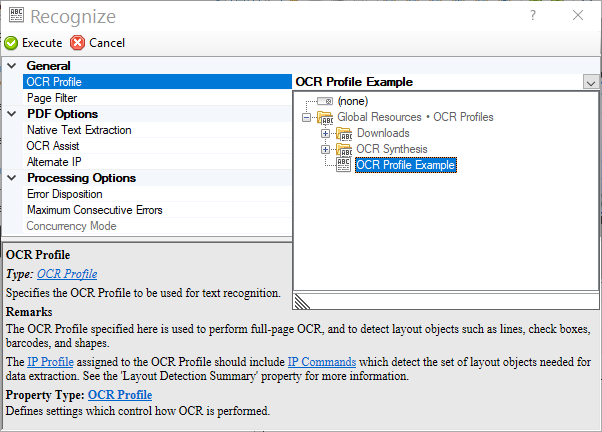 After the Recognize activity is finished, the temporary IP image is discarded, leaving only the original image.

Any IP Command can be used for temporary IP except those that physically transform the image, resulting in the addition or subtraction of pixels. These commands are as follows:

Common IP Commands used in a temporary IP Profile include those in the "Feature Removal" category such as Negative Region Removal, Line Removal and Speck Removal. However, critical to an OCR Engine's ability to recognize characters is the need to be fed a black and white image. While OCR Engines will turn an image black and white on their own during their pre-processing phase, users do not have any control over how that is done. Grooper puts that control in your hands through the Threshold and Binarize commands.

Most, if not all, temporary IP Profiles will include a Threshold or Binaraze command to temporarily turn the image black and white.

Furthermore, binarization is used as a pre-processing command for several IP Commands. Many of Grooper's Image Processing capabilities work better if an image is in black and white instead of color (or simply won't work when using a color image). Take Line Detection for example. At its most basic level, a line on an image is a string of pixels one after the other. Grooper would have to pick out one string of colored pixels in a row and decide if it was a line or just a string of pixels that happened to be the same color. The result would be catastrophic. However, if you convert the color image into a black and white one, you only have two choices to make, is the pixel black or white? Is it a string of black pixels in a row? That's a line. Easy.