Detect Frames  is a batch activity which detects frame locations of documents on a microfiche card. 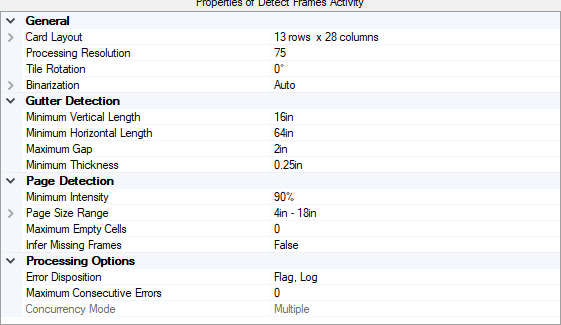 This is the second step in Grooper’s microfiche processing, after an Initialize Card activity has been performed. Documents are arranged on a fiche card in a matrix of rows and columns. The gaps between each document forms a frame of blank space that borders the document. The Initialize Card activity detects these frame locations in a fiche card strip. Once Grooper knows where the frame is around a document, it can go to the next step, Clip Frames, which takes the document image out of the fiche card and stores it as a page in Grooper.

The activity also generates a low-resolution preview of strips of documents on the fiche card. These strips are composed of the tile images organized into subfolders during the Initialize Card activity. But functionally, they are just horizontal strips of the fiche card containing rows of documents. These strip preview images are saved on the strip folder and can be used as the display image during a Review activity to verify frame detection and resolve any frames flagged as having issues.

Detect Frames is a brand new activity in Grooper 2.80. In previous versions, documents from microfiche scans were pre-processed using software local to the scanner. This significantly slows down the speed at which cards can be scanned. Grooper's microfiche capabilities allow the scanner to run at full speed, while Grooper pre-processes them independently. Furthermore, while microfiche scanners do have some image cleanup capabilities, they are nowhere near as robust as Grooper's Image Processing activities. The result is end-to-end microfiche document processing with a faster workflow and cleaner images resulting in more accurate OCR data.

Microfiche is often used for archiving documents. Court records are one example of documents that may be stored on microfiche.

How To: Configure the Activity

The microfiche card must first be scanned directly into Grooper or otherwise imported. The images must then go through the Initialize Card activity to organize the tile images into strip folders.

Under the “General” heading, set the Card Layout settings. Here you specify four important things: How many total rows of documents are on the card (Row Count). How many columns (Column Count). How many rows of documents to expect per strip (Rows Per Strip). And, whether the card has a Reverse Alignment. By default, Grooper assumes the first strip only contains a single row. However, if the last strip contains a single row instead of the first, change the Reverse Alignment setting to “True” 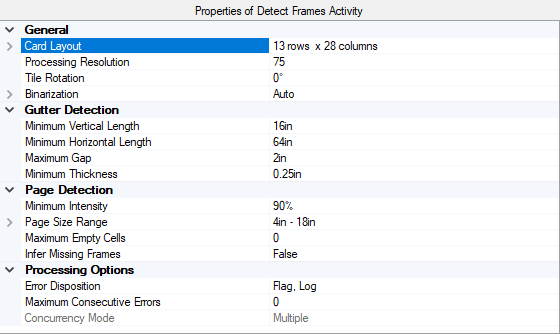 Adjust the preview image DPI and other General settings

You can change the DPI of the strip preview image under Processing Resolution, rotate all tiles by a set degree under Tile Rotation, and how a color or greyscale image is converted to 8-bit black and white under Binarization. 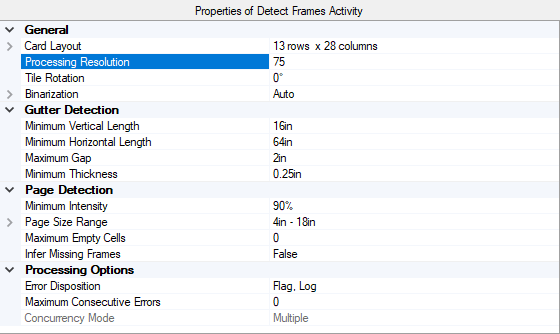 “Gutter Detection” sets the length and width of the lanes of blank space (called “gutters”) between rows and columns of documents. You can alter their Minimum Horizontal and Vertical Length, the Maximum Gap between documents (or the gutter’s thickness) and their Minimum Thickness. Where the gutters intersect forms the frame border. 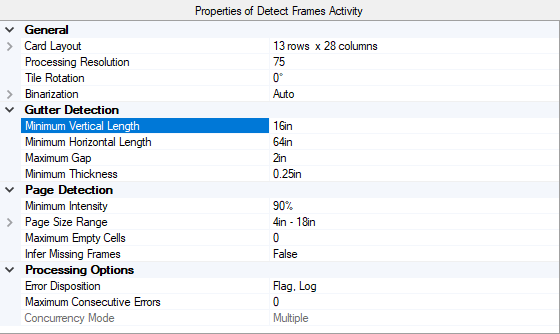 Under “Page Detection”, you can set the Minimum Intensity for each page. Pages are expected to be mostly white (100%). A page with a large amount of black (0%) could indicate a frame detection problem. Anything falling below the value set here will be flagged for human review. You can also set the minimum and maximum Page Size Range, the maximum number of empty cells allowed at the end of a fiche card (Maximum Empty Cells), and whether or not missing frames will be inferred from the set of detected frames (Infer Missing Frames). 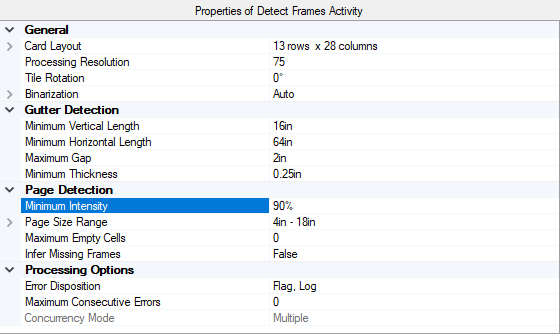