Initialize Card is a batch activity which prepares microfiche scans for further processing.

This is the first step in Grooper’s microfiche processing. Documents on a microfiche card are scaled down images in a matrix of rows and columns on a flat sheet of film. Fiche cards are scanned as a series of smaller tiles, each tile forming part of the whole sheet of film. The Initialize Card activity takes imported tile images and gets them ready for further steps.

First, the Initialize Card activity sorts the tiles and organizes them into subfolders by horizontal strips. So, if there are 7 strips with 22 tile images in each strip of the fiche card, you will end up with 7 folders, each containing 22 images. Second, it stitches these individual tiles into a low resolution preview of the entire fiche card.  This preview image is placed on microfiche card's folder.  This gives users a visual reference for the whole card. 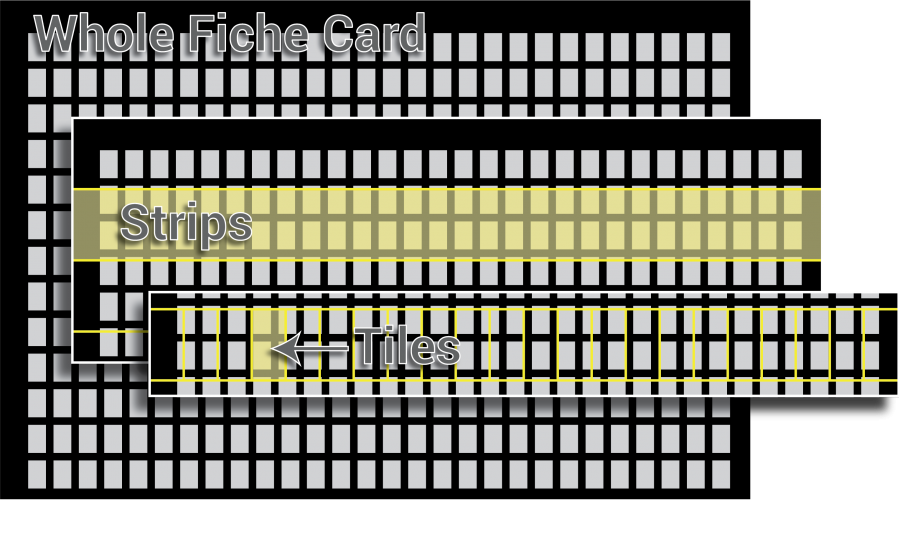 You may notice a tile doesn't always contain a whole document or may contain a whole document and portions of another. That's ok. This is only the first part of getting documents off a microfiche card. After the card is initialized, the scans will need to run through the Detect Frames and Clip Frames activities. By the end of Initialize Card, Detect Frames, and Clip Frames, the tiles are stitched together, individual pages are detected on the card, removed from that card and saved to their own page.

Initialize Card is a brand new activity in Grooper 2.80. In previous versions, documents from microfiche scans were pre-processed using software local to the scanner. This significantly slows down the speed at which cards can be scanned. Grooper's microfiche capabilities allow the scanner to run at full speed, while Grooper pre-processes them independently. Furthermore, while microfiche scanners do have some image cleanup capabilities, they are nowhere near as robust as Grooper's Image Processing activities. The result is end-to-end microfiche document processing with a faster workflow and cleaner images resulting in more accurate OCR data.

Initialize Card is specifically designed for document processing from microfiche scans. Any set of documents stored on microfiche can take advantage of this activity. Grooper does not currently have support for other microforms (such as microfilm). However, now that the groundwork for microform processing is laid, this functionality will be easier to add in the future. If you'd like to see more microform processing added into Grooper, please let us know!

Microfiche is often used for archiving documents. Court records are one example of documents that may be stored on microfiche.  Government agencies often have archiving regulations that stipulate documents must be preserved on microform.  Microfiche is usually the preferred microform because indexing documents on them is easier than other forms such as microfilm ( Microfilm is usually preferred for documents like books and newspapers as you can simulate turning a page by scrolling through the film).

How To: Configure the Activity

The microfiche card must first be scanned directly into Grooper or otherwise imported.

This is a regular expression pattern that reads tile image filenames as they were named from the scanner. The result is used to sort them into row and column numbers

Define the number of strips and tiles

Set the number of horizontal strips of image tiles forming the fiche card using the Strip Count property. Set how many tiles make up each strip by setting the Tile Count property. These settings will correspond to the number of strips and tiles as the card was scanned into the microfiche scanner.

Here you can control the amount of “vertical overscan” included in each strip. This value will come from the vertical overscan setting on the printer itself. During scanning, this adds a set length above and below the scanned strip of microfiche where one strip slightly overlaps the ones around it. This ensures no small gaps between images whenever they are put back together. However, Grooper must know that value in order to stitch the images back together properly.